The ABA League teams scoring around their rim in their half court offense have been the competition’s most efficient teams this season. 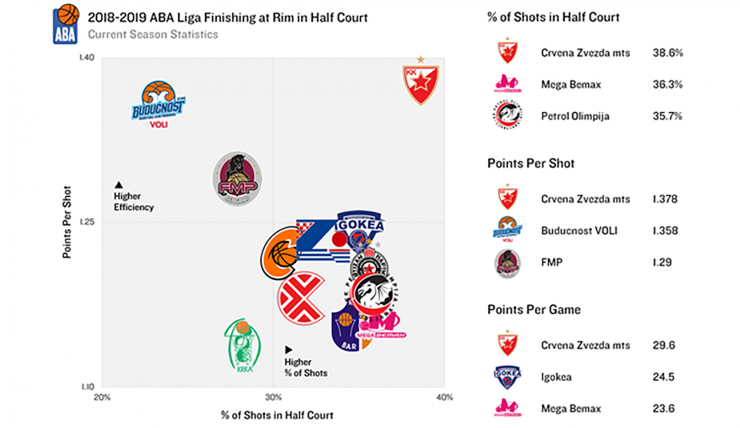 Taking a closer look at the graph above, Crvena zvezda mts and Budućnost VOLI are not only the two most efficient finishing teams in the ABA League in their halfcourt offense, but the two most efficient offenses in the competition overall. Zvezda holds a significant edge on Budućnost in overall efficiency and much of that can be explained by how many more shots they generate around the rim in the half court than the reigning champions. At this stage, no team in the ABA League is generating shots inside as frequently or scoring them as consistently as Zvezda. Their 29.6 points per game from finishing chances in their set offense is on pace to break the modern league record.

To understand what drives some teams’ efficient so far above other, it is important to note that not all finishing opportunities are created equal. Dunks are more efficient on average than catch and finish layups, which are more efficient than driving layups, which are more efficient than tip ins—some looks are harder to create and more valuable than others. Zvezda leads the ABA League in dunks with 24, just ahead of FMP and Mega Bemax, but dunks have made up just 11% of all shots around the rim in the half court leaguewide this season. More importantly, Zvezda leads the ABA League shooting 64% on layups due in large part to their consistency scoring cuts, the play type that typically leads to the most efficient shots inside. For FMP and Mega Bemax, it is the contributions of a pair of the ABA League’s most productive big men the drives their efficiency. Dragan Apić and Goga Bitadze rank first and second in points scored finishing in the half court averaging 9.3 and 8.7 points per game respectively. Each player makes up over a third of their team’s points in finishing opportunities and shoot over 70% inside in the half court.

Not only does the value of different types of shots matter, but the players attempting them matter as well. Interior scoring consistency has long been a staple of the ABA League’s most efficient offenses and often its most success teams, but each of those teams have found success in different ways.

Budućnost VOLIFMP MeridianCrvena zvezda mtsDragan ApićGoga BitadzeMega MIS
Join thousands of ABA League fans in our digital community by liking us on Facebook, following us on Twitter or Instagram and subscribing to our YouTube channel.
If you like this and our other articles, make sure to sign up for the ABA League newsletter. You will be notified regarding all important news and updates on the ABA League via e-mail.
Social Media
Tweets by ABA_League2