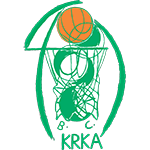 BeginningsSince the club for decades did not compete at the highest level, it is not the best known fact that Krka as a club has a truly long lasting tradition. In 1948 the club, that until the 1990's competed in the lower divisions, was founded in Novo mesto.

Glory DaysThe outburst of quality basketball was seen in Novo mesto in 2000, when Krka, led by excellent, back then still youngsters, Simon Petrov and Matjaž Smodiš, has become the first team to remove Union Olimpija from Slovenian championship throne. Later they competed at the highest European club level – Suproleague and Euroleague. However, the greatest success for Novo mesto basketball came in 2011, when led by head coach Aleksandar Džikić, Krka climbed on top of EuroChallenge cup and became the champion of this European club competition. The same season Krka also reached the ABA League Final Four tournament. The club has also established itself at the top of domestic scene lately, as they have won no less than 7 national championship trophies since 2000. In 2018 the side, led by Simon Petrov won the ABA League 2 in the first edition of the ABA League 2.