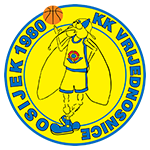 A group of basketball enthusiasts, has formed “Omladinski košarkaški klub Darda” in the Autumn of 1980. The co-founders of the club were mostly domestic players, such as Dragan Vujaklija, Tihomir Matoša and Slobodan Ađanski. Tomo Savičević was the first president and Adam Jene was the first head coach. The club has been competing in the lower divisions of Yugoslav basketball leagues, both in senior and junior categories. While the club has stopped functioning between 1991 and 2004, it has again been founded on 20 August 2004, as Košarkaški klub Darda. Zvonko Radan became the president, while Alexander Hrkač and Dragan Vujaklija have become vice-presidents. The club changed its name to KK Vrijednosnice OS Darda in 2006 and in the 2014/15 season KK Vrijednosnice Osijek.

The club has won the A2 East League in Croatia in the 2008/09 season, as well as the Slavonija and Baranja Cup and qualified for the A1 Croatian Basketball League. However, its biggest moment arrived in the autumn of 2021, when it found itself on the basketball map of the entire region, by entering the ABA League 2 for the first time in club’s history.