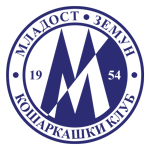 In January 1954, former Jedinstvo junior team, led by the legendary Miomir Lilić Like, have founded a new club in Zemun, that has quickly been promoted to the Serbian League. The golden generation of the Mladost senior team have gathered again by the end of the 50s and have led Mladost to the second division of the Yugoslavian club basketball.

Several important players have worn Mladost jersey in the past like the ones of Bruno Pavelić, Ivan Matković, Stanislav i Renato Bizjak, Jovan Ivić, Tomislav Vilaret, Zoran Hinić, Dragomir Bukvić, Nebojša Toza Zorkić, Branko Mrđen, Branko Sinđelić, Jovica Antonić, Aleksandar Vučić, Vladan Tegeltija, Nikola Bjegović and Nenad Pujaz. The club, however, has witnessed its brightest moments in 1995/94 season, when they have entered the first division of club basketball in FR Yugoslavia. The second peak has arrived in the 2020/21 season, when they have become members of the ABA League 2 and joined the second tier of the elite regional basketball clubs.
Club Information
 KK Mladost Zemun, 11080 Zemun