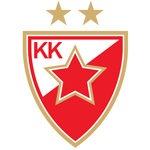 BeginningsThe Belgrade Red and White began their famous history on 4 March 1945 at Kalemegdan, Belgrade, where it also played its first games ever. And since its very beginnings were glorious, it is no wonder that Crvena zvezda Telekom became one of the most well known clubs from this part of Europe and one of the clubs with the greatest fan bases in entire Europe.

Glory DaysThe club went on a trophy-winning streak immediately after it has been established and won 10 straight Yugoslavian National championship trophies since 1946. Today, its trophy case includes all domestic trophies of former Yugoslavia, Serbia and Montenegro and Serbia, as well as the ABA League trophy, won in 2015. Zvezda also posesses one European cup trophy – the title of the winner of European Cup Winners Cup from 1974. Since 2013/14 season, Zvezda is a member of Euroleague again and is representing our competition well in the elite European club competition. In 2015, Zvezda became the champion of ABA League for the first time, by beating Cedevita 3:1 in victories in the Finals of Playoffs and afterwards added several more regional league trophies to their cupboard.

Categories:
In the derby game of the ninth round in the ABA League Regular Season, Cedevita Olimpija have prevailed over Crvena zvezda mts at home in Stožice Arena, Ljubljana.

Categories:
Through 4 rounds, 3 ABA League teams have stood out and 6 have positive efficiency differentials.

Categories:
In the third round of the EuroLeague Regular Season, Maccabi of Tel Aviv have beaten Crvena zvezda mts at home in Israel.

Categories:
We have the MVP of the 1st round of the season and it is Crvena zvezda mts guard Lorenzo Brown. Brown dominated the court in Aleksandar Nikolić Hall in the game of his team against Koper Primorska.

Crvena zvezda mts are back on the ABA League throne

Categories:
Crvena zvezda mts have beaten Budućnost VOLI in Game 5 of the ABA League Finals and are back at the top of the regional basketball after a year of break.

The game of the season coming up in Belgrade

Categories:
The most important game of the 2018/19 ABA League season is coming up, as Crvena zvezda mts will be hosting Budućnost VOLI in Game 5 of the ABA League Finals in Belgrade. One thing is clear before the big clash – the team that wins the game will also win the ABA League trophy – will it be the reigning ABA League champions or vice champions? That’s the question!