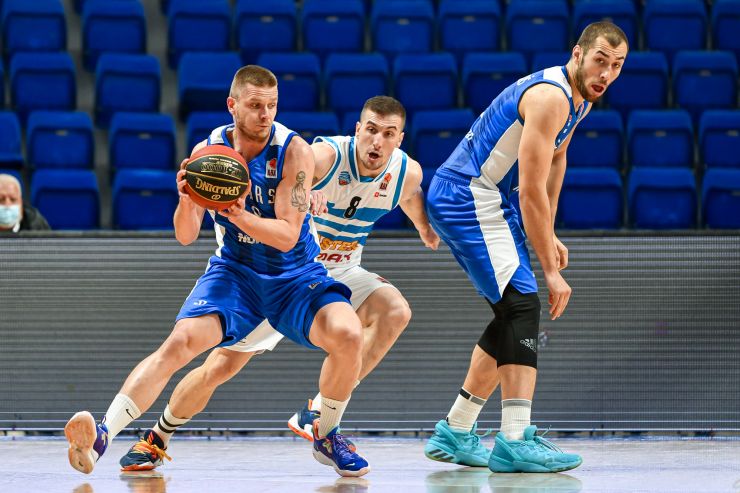 Spars have won Game 1 of the 2020/21 ABA League 2 semi-final series vs. Podgorica by 72:64. The Sarajevo squad have therefore gained an 8-point lead ahead of Game 2 that is scheduled for Sunday, April 25. If Spars win that game or lose it by 7 points or less then they will advance to the Finals, while on the other side Podgorica will have to win Game 2 by 9 points or more to advance to the final stage of the Playoffs.

Spars have been in front throughout the whole game today. They even had a 14-point lead at the halftime – 46:32, however Podgorica troops bounced back on their feet in the 2nd half and managed to reduce the gap to 8 points.

Spars star player Amar Gegić was the game top scorer with 20 points, while his teammate Kenan Kamenjaš posted another double-double with 12 points and 11 rebounds.

In Podgorica team Ognjen Čarapić scored 14 points, while Novak Musić finished the match with 12 points and 14 assists. Only two players in league history made more assists in a single game than Musić. Former Koper Primorska player Žan Mark Šiško holds the league record with 17 assists made in a game between Koper Primorska and Borac back on March 20, 2019, while former Split player Earl Washington had 16 assists in the match between Split and Novi Pazar on December 26, 2019.

Click here for more match stats
Match: Podgorica - Spars
Join thousands of ABA League fans in our digital community by liking us on Facebook, following us on Twitter or Instagram and subscribing to our YouTube channel.
If you like this and our other articles, make sure to sign up for the ABA League newsletter. You will be notified regarding all important news and updates on the ABA League via e-mail.
Social Media
Tweets by ABA_League2