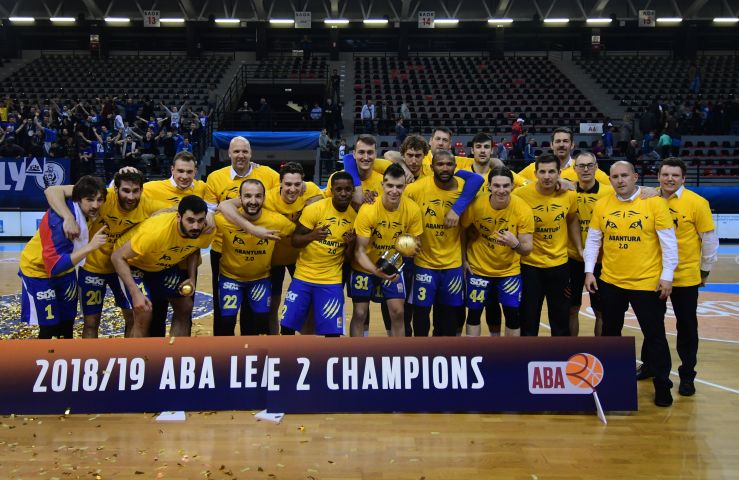 It’s all over! Sixt Primorska have won the 2018/19 ABA 2 championship after beating MZT Skopje Aerodrom by 3-0 in the Finals. The boys from Koper have firstly won two games at home court quite convincingly, while this Thursday evening they won the thrilling match in Skopje and finished the series.

This is the first ever ABA 2 trophy for this club and this means that Sixt Primorska have qualified for the 2019/20 ABA 1 season. On the other side, MZT Skopje Aerodrom will play against Zadar in the 2019 ABA Qualifiers.

Sixt Primorska have had the lead throughout the whole Game 3 in Skopje, but they almost let the home side make a stunning comeback in the final minutes. The visitors were up by 62:56 with minute-and-a-half left on the game clock, but then MZT made a 5:0 run in just 30 seconds and reduced the gap to 1 point – 62:61.

The following 30 seconds were crucial for this match. Sixt Primorska player Žan Mark Šiško escaped his guards to score a very important lay-up for 64:61, while then Mario Čakarun made a huge job defensively by blocking Lester Medford and creating a fast break for the visitors in which his teammate Alen Hodžić scored an easy lay-up for 66:61. And it was the final score of this match.

Match: MZT Skopje Aerodrom - Koper Primorska
Join thousands of ABA League fans in our digital community by liking us on Facebook, following us on Twitter or Instagram and subscribing to our YouTube channel.
If you like this and our other articles, make sure to sign up for the ABA League newsletter. You will be notified regarding all important news and updates on the ABA League via e-mail.
Social Media
Tweets by ABA_League2