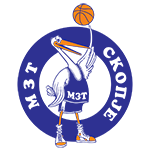 Beginnings The long lasting tradition of MZT Skopje Aerodrom goes back into the year of 1966, when the club named KK Skopje was founded in the capital of Macedonia. It adopted the current name MZT in 1984 when factory Metalski zavod Tito (MZT) took over the club and built the famous Jane Sandanski arena in part of the town, named Aerodrom.

Glory Days For the first time, MZT introduced itself on the top level in 1986, when led by legendary head coach Lazar Lečić it reached the top division of Yugoslavian club basketball and appeared there for two seasons. Since independence, the club has emerged as one of the main powers of Macedonian club basketball and has until today won six Macedonian national championship and eight national cup trophies. For several seasons in the 1990's, as well as in the 2013/14 season, it has competed in European competitions like Saporta Cup and Eurocup